By Don Baldocchi on May 4, 2014 in CA Native Plants, Featured Plants, Installations If it’s not apparent, California is now in a big-time drought. After three consecutive years of below-normal rainfall, California faces its most severe drought emergency in decades. Governor Jerry Brown recently called for Californians to voluntarily reduce water use by 20 percent.

What’s more, mandatory rationing could be just around the corner so that homes, businesses, and farms don’t dry up over the summer.

In an environment like this, what’s a landscape pro to do when the success of his or her landscape project depends on life-giving water? One of the best strategies to consider is going native.

California native plants are important because they’re water efficient and provide biological diversity for surrounding ecosystems. Using “California-friendly” plants is a best-practice that benefits both local habitat and area inhabitants—people and wildlife.

A gallery of beautiful, water-wise natives.

For landscape professionals interested in implementing a native strategy for their clients and projects, we offer a gallery of the many native plant species that are beautiful, require little water and improve virtually any landscape.

There is also a specimen detail list below the gallery that provides a summary of each plant’s characteristics and preferred location. A large shrub with a dense mass of dark wrinkled green leaves, covered with deep blue flower clusters in early spring, mostly March to April. Requires good drainage and infrequent to no summer watering, can be temperamental, preferring sun to partial sun exposure. An abundant perennial small shrub found naturally at the base of cliffs in rock crevasses, preferring sun exposure. Finely leafed foliage, green above and woolly below. Blossoms are clusters of yellow flowers, displayed from March to August, attractive to butterflies. This penstemon has scarlet red blossoms with blue-gray foliage, a long bloom season, and is very drought tolerant. This plant prefers hot, dry summers and mild winters to perform well. Provides interesting texture contrast, with many erect narrow blades that fan out in vase-shaped foliage, in dense clumps. Stays evergreen without summer water. A deciduous shrub, this plant has long, graceful pink flowers, 15–40 in a cluster. Blooms from January to March and produces blue blackberries. This is one of the most attractive native species in the Bay area. Will tolerate a range of soil conditions, and is moderately drought tolerant. This showy perennial has abundant apricot-colored blossoms that will attract hummingbirds. Occasional summer watering will extend the blooming season. It is also drought tolerant. 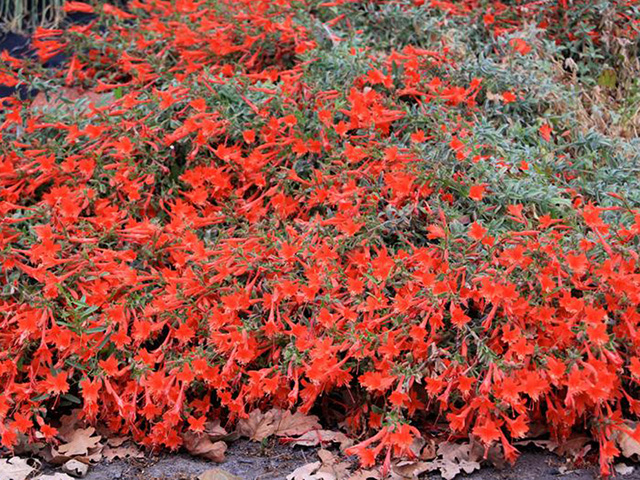 Also referred to as Zauschneria californica, the abundant scarlet tubular flowers appear in the fall, looks best when trimmed after flowering or before new growth begins. Attractive to hummingbirds. Yellow flowers create an attractive display from May to June as flowers bloom all at once. Leathery leaves are dark green above, fuzzy beneath. This shrub needs good drainage, and hillside planting is the best with staking when young. Needs no dry-season watering. This native is an important honey plant, attractive to butterflies, and will help stabilize slopes. Forms hemispheres of growth, topped with pinkish-white blossoms in the summer that turn to rusty red in the fall.

Time to steer your clients to a native, water-wise landscape.

If you want to learn more about native plants, feel free to contact any of our experts at Pacific Nurseries. As both a grower and a plant broker, we’re ready to work with you to provide just the right native plants and trees that will make your project a water-wise success. It’s one of the many qualities that make us different from just an ordinary nursery.


I need an Estimate

Have you installed California native plants in your recent project? Share your favorites!

As President of Pacific Nurseries, Don Baldocchi gets satisfaction knowing the Bay Area is greener and more beautiful by helping landscape professionals succeed. Email Don or give him a call at 650.755.2330.
View all posts by Don Baldocchi →

Get an Estimate | Place an Order Go to our online estimate/order form, enter or upload your plant list, and submit. It's easy! Estimate | Order We deliver plants right to your job site with our scheduled deliveries throughout the Bay Area. Learn More